Check out our summary and thoughts on The Walking Dead issue 176 from Image Comics. 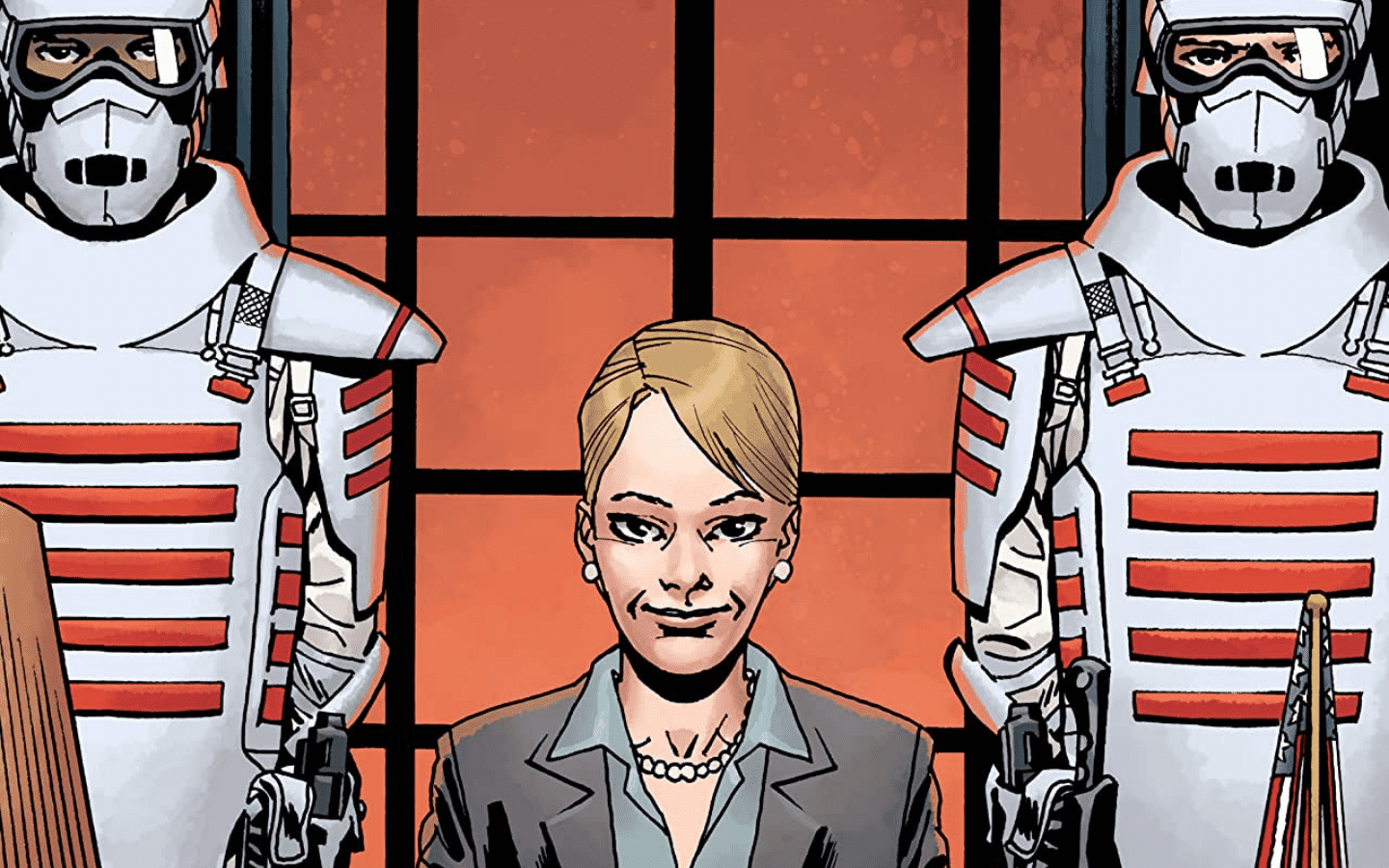 About The Walking Dead Issue 176

The Walking Dead #176 is written by Robert Kirkman. The artwork is by Charlie Adlard, Stefano Guadiano, and Cliff Rathburn. This issue was released on May 2nd, 2018. The Walking Dead is published by Image Comics.

The Walking Dead issue 176 came out this week and I am glad that it did. I have been loving this new story arc. Much like volume sixteen, A Larger World, the Walking Dead universe just got a whole lot bigger. On top of having fifty thousand new characters to meet, we get to see the solution to last month’s insane cliffhanger.

The group sent to meet up with The Commonwealth is still making its way into the establishment. Michonne only had one thing on her mind. Her daughter may still be alive.

Seeing her again is the number one priority over everything else. This creates a lot of tension between the new and old characters, but they still head into the town.

Once the group enters the town we get our first sight of Stephanie. This is a big moment for both us and Eugene. We finally get to lay eyes on the mysterious voice from the radio.

Stephanie is reprimanded for attempting to speak to Eugene. It seems as though The Commonwealth is very concerned with order and the roles people play. We will discuss that more later.

Once we enter the Governor’s building (I know, another governor in the mix) we are introduced to Maxwell Hawkins. I don’t know about you, but this dude gives me the creeps. Even though he was nice to the characters there is just something about his face.

He kind of reminds me of Herr Starr from Ennis and Dillon’s Preacher. This encounter is where we get another look into the views of The Commonwealth.

Maxwell decides who gets to meet the governor by asking everyone what job they had before the apocalypse started. Though he does not state the importance of this, he picks Michonne due to her being a lawyer.

Michonne then gets to meet Pamela Milton, the governor of The Commonwealth. We all know how much Michonne loves governors. Pamela seems very proper and acts similarly to governors and politicians of our world.

For me, this conversation was the meat of this issue. Though they are just getting to know each other, we get some insight into the philosophy of The Commonwealth.

Pamela describes The Commonwealth as “…what rose from the ashes of our world and brought order to chaos.” I had assumed that this community had been around since the start of the apocalypse. We’ve seen a few hundred people take on herds and firefights.

Fifty thousand people are more than enough to combat the biggest zombie and human threats. Pamela’s words have me thinking otherwise. She talks about putting the world back together after it fell apart. I question whether or not she would be saying this if she had not seen some action.

At this point, we have already seen two examples of how leaders in The Commonwealth care about roles and professions. Strictly adhering to order seems to be their main concern. Pamela states that people need to be occupied in order to avoid chaos.

She speaks to the importance of leaders and brutes. Her words hit close to home. The strong enforce the will of the leaders to maintain order. This sounds like America.

I am wondering if Kirkman is going to use The Commonwealth as a backdrop for more modern political storytelling. The name sure fits.

Soldiers of The Commonwealth

The conversations between the soldiers is another fascinating aspect of this issue. The head soldier mentions “The Magenta Swarm” which I assume is code for a herd. This is our first taste of The Commonwealth’s zombie defenses. Maybe the soldiers name the herds similarly to the way we name storms and hurricanes.

On the other hand, the color could be the name of the geographic location the herd currently occupies. I think these are the two most likely reasons for the name, but who knows. It could be something completely different. Maybe The Magenta is the name of the opposing force that sent the herd toward The Commonwealth.

The soldiers talk about how badly they want to shower and sleep after returning from their trip to pick up the group. They seem to be upset that they had to camp out for three days before the group arrived. If this is how soldiers in this community act then I am inclined to say that living in The Commonwealth is probably pretty cushy.

The issue ends with Michonne finally being reunited with her daughter. I feel like this is a very quick development for the Walking Dead. This is even mentioned by the editor in Letter Hacks. Kirkman wasted no time in getting this storyline moving.

The look on Michonne’s face the first time she sees her daughter is priceless. A payoff this big is such a great development for an older character. This is especially true for Michonne who has had to endure the wrath of The Governor and the loss of Ezekiel.

The Walking Dead issue 176 was amazing! It was full of many big reveals and a ton of new information. We are no longer being teased by the sight of a bigger universe.

We finally get to start exploring. The Walking Dead Issue 176 leaves more questions than answers but still provides an entertaining experience. I loved The Whisperers, but this is the most excited I have been for this book in a long time.

What Did You Think of The Walking Dead Comic 176?