Check out our thoughts on Image Comics' The Walking Dead issue 179! 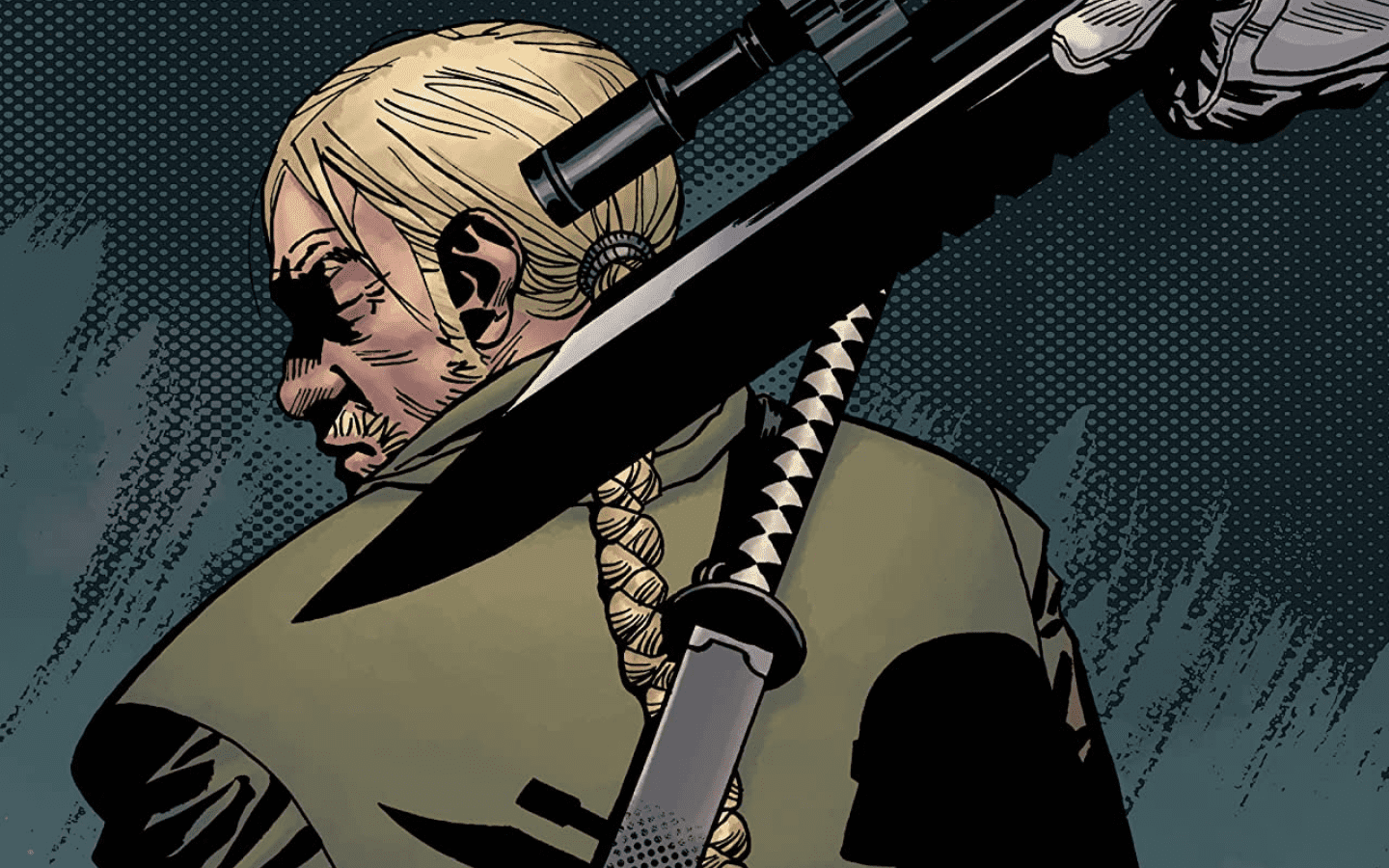 About The Walking Dead Issue 179

The Walking Dead #179 is written by Robert Kirkman. The artwork is by Charlie Adlard, Stefano Guadiano, and Cliff Rathburn. This issue was released on May 2nd, 2018. The Walking Dead is published by Image Comics.

Beware: The are spoilers in this Walking Dead issue 179 review!

I have been excited for The Walking Dead issue 179 since the cover was released a few months ago. Seeing Eugene with Michonne’s katana had me convinced that this was one of Kirkman’s famous troll covers. We now know that is not the case, but more on that later.

This issue picks up with the aftermath of the scuffle seen in last month’s issue. Michonne is worried about Elodie’s comments regarding The Commonwealth’s societal structure. It is then explained that The Commonwealth works on an income-based class system. People are given jobs and salaries that are based on their pre-apocalypse professions. Once a year every citizen can petition for a raise. It seems The Commonwealth works like one giant corporation.

Everyone has their own opinion about this. Michonne, happy to be reunited with Elodie, understands why The Commonwealth is structured in this manner. Many of the group members agree with her.

The biggest differing opinion is Magda. She does not believe that the world should revert back to wealth-based hierarchies. She much prefers the original colonies which adhere to more of a socialist economic system. Magda refuses to take part in any of The Commonwealth’s accommodations (with the exception of the football game).

I do agree with Michonne’s standpoint. Socialist and communist economic systems tend to work better in smaller establishments. For example, most of our families have no problem sharing resources. We cook dinner together, go shopping together, and take care of each other regardless of status.

This becomes nearly impossible to maintain as the group grows in size. Resource scarcity causes people to divvy up materials unevenly. When this occurs, those with rarer materials and skills offer more value to their respective communities.

They have grown so big that a more advanced economic system is needed. That said, I wish everyone had got a fresh start instead of carrying on their pre-apocalypse legacy. It was interesting to see the characters discuss (or at least hint at) these concepts.

Outside of all of the political philosophy talk, we finally get what has been waiting a year to see. Stephanie is finally putting the moves on Eugene! My man has not had the best love life in the zombie apocalypse. Judging by his conversation at the end of the issue, Eugene is pretty excited by the idea of having a relationship and starting a family.

I honestly never thought that I would see a football player in The Walking Dead. Viewing the panels of the football game was a weird experience. However, I am glad that the story is getting to the point where we are seeing the characters start to have time for entertainment. This means that societies are moving past the pure survival stage and can progress other aspects of their lives.

This is where we get to the scene shown on the cover of the issue. Michonne decides to stay at The Commonwealth. As Magna pointed out previously, Michonne was a lawyer and would probably have a cushy life at The Commonwealth. This is further reinforced which she is blatantly told this during her meeting with Lance.

I thought Michonne giving up her katana was a great piece of plot development. She is one hundred percent correct. When Rick sees that she has put down her sword he will know that she is serious about her endorsement of The Commonwealth. As we find out during the trip back to Alexandria, Eugene is not as confident.

I have no idea what is going to happen next. The Commonwealth is much larger than Negan and The Governor’s societies. This does not seem to be a group that Rick can win a war against. Stumbling upon this group could be the worst thing to ever happen to our group.

However, I am hoping for the best. If the communities decide to band with The Commonwealth the story can then open up to a much larger scale. We may begin to see larger networks of communities or even correspondence with other countries. This arc just keeps delivering the good stuff and has most definitely got me excited.

What Did You Think?

What did you think of The Walking Dead issue 179? What political/economic system would you use in your post-apocalypse society? Let me know on social media!