Three episodes in and we only have more questions! 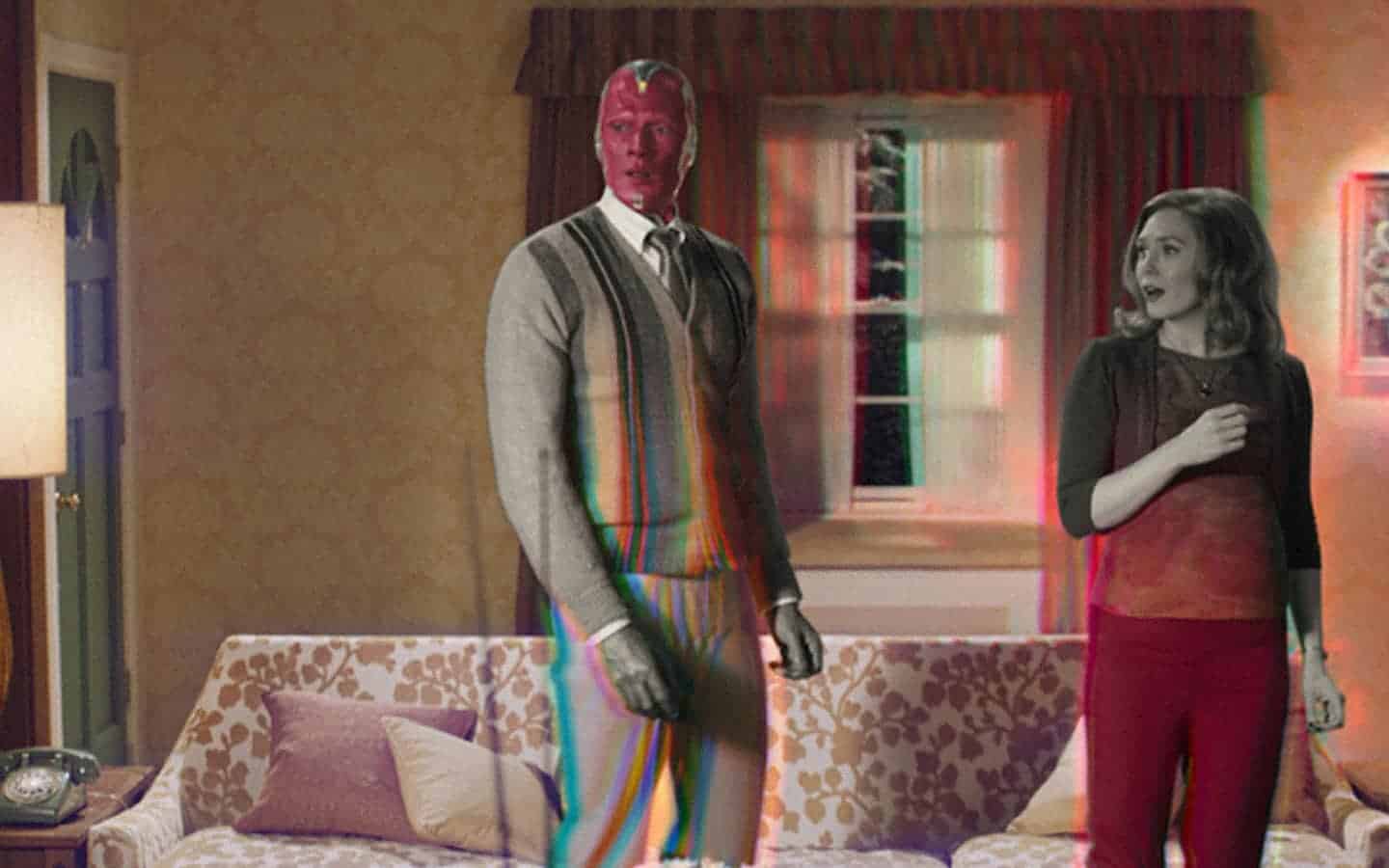 As the strangest entry in the MCU canon continues, we are starting to learn more about Westview, the Visions, their neighbors, and their place in the larger continuity…all while enjoying the enveloping hilarious hijinks. This episode successfully imitates 70s sitcoms, particularly those dealing with pregnant characters; however, it also dives more into the meta plot than either of the first two episodes.

We’ll be going through each episode of WandaVision one by one, discussing some of the highlights, making predictions, and talking about what is working and what is not. This is your warning that there will be spoilers, though I’ll try to keep them as light as possible.

Before our water breaks, let’s tune into WandaVision.

Already people are comparing the opening theme to The Brady Bunch, at least visually, but only a few panels really seem to reference that show (though the Visions’ new staircase is straight out of the Brady home). The rest of the theme is much more akin to The Mary Tyler Moore Show, and while I respect the creators’ restraint in avoiding a thrown hat joke, I also kind of wish it got at least a nod.

As always, Christophe Beck’s score for this episode of WandaVision is a stylistic marvel that tells us what we need to know about a given scene while using the musical tropes appropriate to the period and staying unobtrusive. This isn’t surprising from the man who gave us some of the most iconic and wonderful pieces from Buffy the Vampire Slayer and countless other film and TV works, but I am continually amazed by his talent.

WandaVision Episode 3 picks up a few hours after the last one ended, with Wanda (Elizabeth Olsen) and Vision (Paul Bettany) discovering that she’s pregnant and, according to Dr. Nielsen (Randy Oglesby), six months along. Vision tries to subtly wrap his mind around the fact that his wife is six months pregnant after only twelve hours, and it’s an absolute treat watching Bettany stretch his comedic muscles here. What works possibly better than anything else is the timing, with Vision interrupting just enough to be charming without seeming like a jerk.

Unlike the first episode of WandaVision, which waited most of the runtime to start introducing the strangeness, this jumps right in with Vision’s neighbor Herb (David Payton) trimming his hedges before casually continuing into the cinderblock wall between their houses. When Vision makes a joke about it, Herb seems entirely unaware of what he’s doing and why it might be strange.

Wanda, meanwhile, has discovered that her pregnancy is causing her to lose control of her powers, provoking all the kitchen appliances to turn on during a Braxton Hicks contraction and resulting in the whole neighborhood losing power.

As Wanda continues to grow visibly more pregnant in a matter of minutes, Vision scrambles to figure out what to do and how they can have these babies without giving up their secret. When he runs off at super-speed to try and catch the obstetrician before he goes on vacation to Bermuda, Wanda is forced to try and hide her condition from Geraldine (Teyonah Parris), who shows up to ask for a bucket due to the indoor rainstorm that Wanda’s chaotic magics unleashed on the neighborhood.

This kicks off one of the best sequences of the episode, which not only makes fun of attempts by networks to hide the pregnancies of their actresses with carefully chosen shots, bulky coats, and bowls of fruit, but also does some great sitcom gags including the appearance of a live stork that Wanda can’t seem to make disappear and is always seconds away from being noticed by Geraldine.

As for speculation, there were a lot of clues dropped in this episode. First, more citizens of Westview seem to have an idea that something is wrong. Herb tries at one point in the episode to tell Vision that “[Geraldine] came here because we’re all” something, but can’t seem to finish the sentence, particularly when Agnes (Kathryn Hann) unsubtly tries to stop him.

Speaking of Agnes, suggestions that she might be Agatha Harkness is bolstered in this episode since she is wearing the same cameo necklace that Harkness wears in the comics. If she is Wanda’s mentor in this, it might explain her desire to maintain the fiction for Wanda’s sake (or out of fear of what her student might do).

The fake commercial in the middle of the episode is for a bath product called “Hydra Soak,” which appears to be a reference to an alternate timeline episode of Agents of S.H.I.E.L.D. where Coulson says that Hydra used a blue soap that was capable of implanting false memories.

Geraldine also seems to be much more in the know than she is letting on. At one point in the episode when Wanda is talking about her brother, Geraldine mentions that he died fighting Ultron, which makes Wanda incredibly angry, eventually leading to Scarlet Witch ejecting her friend from the fiction. We see Geraldine land outside of a modern town of Westview that seems to have an area with a force field and the slogan “Home: It’s Where You Make It.” This section also has Wanda notice that Geraldine (who we know from casting announcements to be Monica Rambeau) is wearing a necklace with the S.W.O.R.D. logo on it.

One possibility is that Monica has entered the fantasy Westview in an effort to slowly bring Wanda around to reality without risking the lives of the other people inside, who seem to be stuck there based on statements several make throughout the episode. However, a conversation between Agnes and Herb in front of Vision suggests that she is not necessarily welcome there since they both point out that she’s new in town and doesn’t actually have a home.

The names of the twin babies, Tommy and Billy, are references to the children that Wanda and Vision had in the comic mini-series that inspired this show. Billy Kaplin and Tommy Shepherd will grow up to be the heroes Wiccan and Speed, respectively, mirroring Wanda and Pietro both in being twins and in power sets. A potential explanation for what’s going on actually comes from one of Wiccan’s powers, which is the ability to see other universes and even pull them into his own. If Wanda can do the same, it might be how Wanda got a new Vision and also potentially ties into Doctor Strange in the Multiverse of Madness.

Getting into some speculation, the show seems to want us to think that Wanda is the sole controller of this reality and that several forces are working to either help her maintain or dismantle it. The involvement of S.W.O.R.D., which in the comics is meant to deal with extraterrestrial threats, as well as the bee imagery makes me think that there’s more going on here than previously explored.

That would explain the involvement of S.W.O.R.D. and Monica Rambeau, whose only appearance as a character in the MCU so far has been as a child in Captain Marvel. It would dovetail nicely with Nick Fury being Talos in disguise as revealed in the post credits sequence of Far From Home, since it establishes that there are at least two Skrull on Earth, and touches on the title of the Fury Disney+ series: Secret Invasion. Moreover, Herb could have been trying to say, “She came here because we’re all Skrulls.” Even more than that, “Home: It’s Where You Make It” sounds a lot like the motto of a town composed primarily or entirely of refugees.

Either way, if there’s one thing that can be said for WandaVision, it’s that it knows what it is and when it’s being written. They expect endless think pieces like this one speculating on what’s really going on, so in order to draw out the mystery, they give us several potential explanations with enough supporting evidence for each. The question becomes whether they can stick the landing by making them all make sense rather than just having loaded us up on red herrings to obfuscate the real plot.