WandaVision Episodes 1 & 2: Weird and Fun in the MCU

...what? You expected super hero shenanigans? 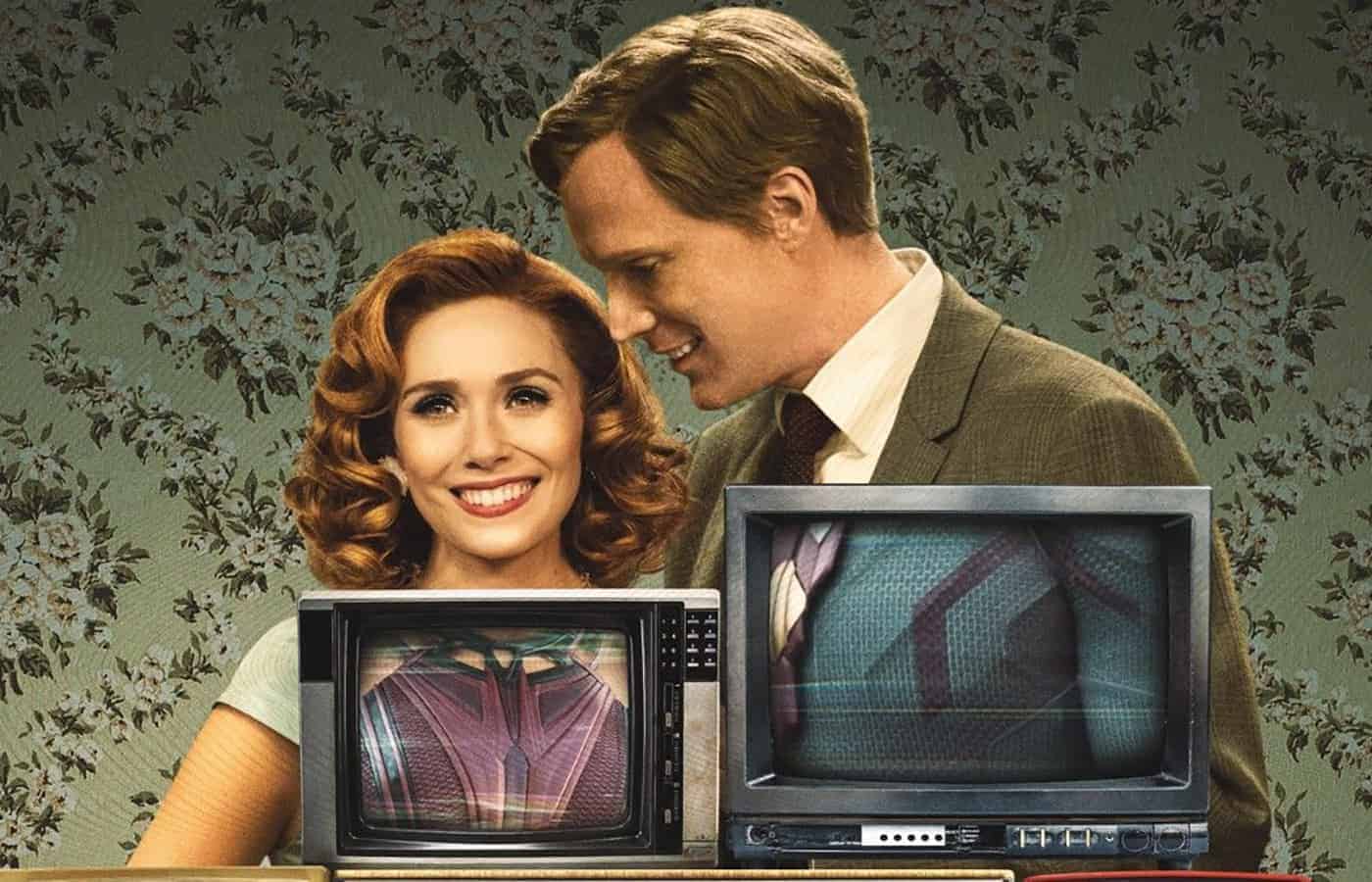 After a year where the MCU train derailed when it turned out that the track, the ties, and even the dirt itself was on fire, Disney+ has decided to go all in on its MCU tie-in shows, kicking off with WandaVision. This quirky 9-episode show is an in media res look at one of the most famous couples in the Mighty Marvel stable who, quite frankly, weren’t given nearly enough time in the films to earn the emotions that Endgame seemed to want us to have. That being said, somebody at the script stage must have realized that since they followed up with the genocide of half the universe to distract us.

And now we have WandaVision, a half hour sitcom in which the titular couple Wanda Maximoff (Elizabeth Olsen) and Vision (Paul Bettany) move to the idyllic, middle-American town of Westview where they try to fit in despite being a witch and a synthezoid in disguise.

…what? You expected super hero shenanigans?

We’ll be going through each episode one by one, discussing some of the highlights, making predictions, and talking about what is working or not. This is your warning that there will be spoilers, though I’ll try to keep them as light as possible.

What is immediately striking about the first episode of Wandavision is that it is not a parody of 50s sitcoms, nor a sendup of them. It is a genuine 50s-style sitcom most in the vein of The Dick Van Dyke Show, from the layout of their suburban house, to the furnishings, to a visual gag that mimics the famous “Van Dyke trips over the ottoman” joke, but instead has Vision phase through a chair.

The similarities are more than skin deep. The jokes are in that style as well, and even without the laugh track I still find them hilarious. Bettany and Olsen have astonishing chemistry on screen that was never allowed to shine through when they were a tacked-on B-plot compared to Tony and Steve’s lovers’ quarrel in Civil War or overshadowed by the arrival of the past decade’s Big Bad.

Moreover, though, both of them are having so much fun in these roles, bringing joy and energy to a genre that is famous, primarily, for being stock pablum. There’s a reason why Dick Van Dyke was astonishingly popular at the time, and instead of taking the boring route of cynically deconstructing its framing, Wandavision lovingly studies what works about those old shows and makes it work again.

The weirdness of WandaVision also enters subtly. With the exception of a blinking red light during a fake commercial for the Stark Toast Mate 2000, the black and white is consistent throughout the episode. The camera work mimics the style perfectly until there are some cracks in the illusion when Vision’s boss, Mr. Hart (Fred Melamed) and his wife (Debra Jo Rupp) ask the couple questions about their lives that neither seems able to answer.

Rupp’s tonal shift from a laughing, “Stop it” when her husband starts choking on a piece of food, to a creepy, Lynchian repetition of the phrase is disturbing and kicks off a brief move to more modern cinematography when Wanda commands (there’s no other word for her tone) Vision to save Mr. Hart.

The creepy weirdness plays very well in this show, coming in just when the sitcom schtick starts to become a bit stale. Moreover, it makes some of the lighthearted jokes from earlier in the episode more sinister, like how Vision can’t seem to get anyone to tell him what the company he works for actually does. It really seems to take aim at millennial sensibilities, which lend themselves to the surreal a la Too Many Cooks and the like.

I admit, I’m glad that they released the first two episodes of WandaVision at once. The first is very much establishing both the sitcom and meta premise, and while I loved every minute of it, I don’t know how primed I would otherwise have been to dive into the latter. You need to earn your payout with a solid setup, but this setup earned more than it gave us in this episode alone.

As far as speculation, the only bit of real meat we’re given for the mystery is that after the fake credits roll, the camera pulls out to show a pair of hands taking notes on the show they are watching on a television built into a hyper-tech wall. The notebook appears to have the S.W.O.R.D. logo on the cover (S.H.I.E.L.D.’s counterpart dedicated to fighting interstellar threats to the Earth).

From the very first moment of WandaVision, we are given a drastic change in style. The opening credits have moved from Dick Van Dyke to Bewitched, matching the art, actions, and even the music to a certain extent. Vision’s and Wanda’s hairstyle have also changed to more closely approximate Dick York and Elizabeth Montgomery.

After a gag about Wanda and Vision in separate, twin beds and frightened by a noise outside, we fast forward to the next day when the two of them are practicing a stage magic show for the elementary school fundraiser. Unlike the last episode, this one feels very little compunction to remain strictly loyal to its premise as an early-60s sitcom.

Instead, it breaks from the formula pretty quickly when Wanda notices another non-black-and-white item in her rose bushes: a small toy helicopter that also has the S.W.O.R.D. logo on it. Before she can puzzle over it too much, nosy next-door neighbor Agnes (Kathryn Hahn) shows up and seems to drag her back into the fantasy by calling her “the star of the show.”

I didn’t mention Agnes in the last episode despite the fact that she was excellent, but it’s not until here that she seems to have a purpose. Based on the name and what we’ve seen in the trailers, I’m putting my money on this being Marvel character Agatha Harkness having either busted into this false reality or trying to help somebody (possibly Wanda herself) maintain it.

We’re also introduced to Dottie, played by the always delightful Emma Caulfield as a snobby Queen Bee character who uses her social capital to bully the other housewives. She is, of course, in charge of the talent show and we’re given more peeks behind the curtain at the organizational meeting.

Not only do the housewives have a seemingly choreographed response to specific phrases and actions, such as repeating “for the children” in a monotone that would make the citizens of Hot Fuzz’s Sandford green with envy, but whenever Wanda tries to have a side conversation with Geraldine (Teyonah Parris), something that would normally be ignored in a sitcom from this era, Dottie immediately draws their attention (and the camera), back to normal.

After the meeting, “Help Me Rhonda” is playing on the radio and is interrupted by a voice saying “Wanda, can you hear me?” and “Who is doing this to you, Wanda?”, which Dottie also hears. We see more red when Dottie shatters the glass she’s holding and starts bleeding, then passive-aggressively berates Wanda for getting blood on a white linen napkin.

Watching Olsen and Caulfield play off one another, with Wanda’s genuine bafflement and Dottie’s barely controlled rage at these intrusions into the plot, builds the mystery so well. The temptation would have been to make Wanda the only one who notices these continuity breeches, but instead it’s somewhat inconsistent, feeding into the “we’re hiding who we are” sitcom story while also advancing the meta plot.

On Vision’s side of things, he decides to attend a neighborhood watch meeting at the town library. However, when he gets there he discovers that it’s just an excuse for Westview’s husbands to get together and gossip. Though he doesn’t eat, Vision does accept some gum which he accidentally swallows, getting it stuck in his gears and making him act as if he were drunk.

Bettany, again, is having more fun here than I’ve seen him in any role since A Knight’s Tale. His aw shucks sincerity not only plays well into the sitcom side of things, but goes a long way toward making us like him in this setting. In fact, I like them both so much that when the other world starts to break in, I genuinely don’t want it to. The show has gotten me on its side.

I could probably wax endlessly about the drunken magic show where Vision uses his synthezoid powers as magic tricks and Wanda uses her hex powers to make the tricks look obvious so he doesn’t blow their cover, but it’s mostly another example of them making a really good, really funny sitcom with Olsen and Bettany just giving and giving to one another.

What’s significant about WandaVision, however, is that the inebriated Vision accidentally says the magic word without putting Wanda in the “Cabinet of Mysteries,” so Wanda is forced to magically teleport Geraldine from backstage. Unlike other citizens of Westview, however, Geraldine seems to recognize the weirdness of being magiced into a box and doesn’t immediately try to steer the plot back to normal. She reacts, in other words, like a real person and not just an archetype used to fill out the world.

Finally, the episode ends with another cinematography change where Vision and Wanda go outside and see somebody in a beekeeper outfit emblazoned with the S.W.O.R.D. logo crawling out of the sewer. Wanda merely says, “No,” and time rewinds, putting her and Vision back inside with no interruptions. Vision is surprised to see that Wanda is now noticeably pregnant, but not in the way you would think, and everything turns from black-and-white to color. I only hope that Paul Bettany isn’t replaced with Dick Sargent.

This episode leans even more heavily into the mystery and I’ve now seen enough that I’m here for it. The nod to Bewitched changing to color in its 6th season was a nice touch, as was the effort put into making the stylistic changes distinct from the sitcom frame. This may be the most I’ve ever enjoyed Paul Bettany on screen (and I like him a lot as an actor), Elizabeth Olsen plays the middle ground between realities well, and the supporting cast does a great job of pushing up against unbelievably absurd without crossing that line.

While WandaVision really, really wants us to think S.W.O.R.D. is behind Wanda being inside this weird reality, the hexagonal iris-out that both episodes have had and the beekeeper’s appearance keep me coming back to AIM. I’m probably wrong, but my mind is stuck there. If it is AIM, I hope Agnes’s much-maligned husband, Ralph (not seen on screen yet) turns out to be MODOK.

Clearly, there are forces at work trying to get Wanda out, but Wanda has no desire to leave Westview and, if she’s as powerful as she is in the comics, that’s not going to be easy.

WandaVision can be watched every Friday on Disney+.