War of the Gargantuas: A Very Bizarre History

This is the very odd history of War of the Gargantuas. 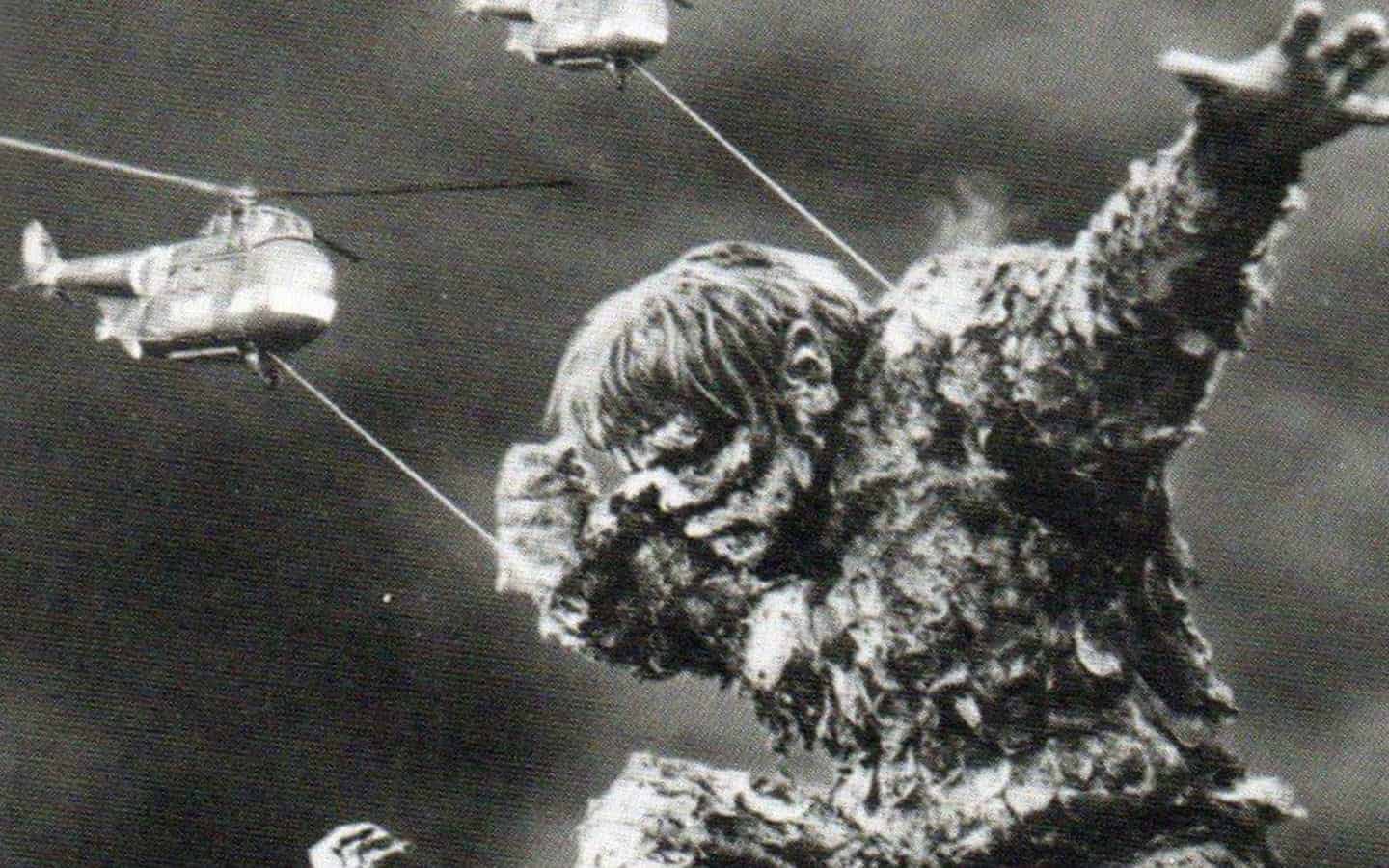 This is the very odd history of War of the Gargantuas.

So what do Godzilla, King Kong, and Frankenstein have in common? No this is not the beginning of a bad joke, but these movie monsters are part of a very strange rabbit hole that leads to the creation of one of the kaiju genre’s fan-favorite films: War of the Gargantuas (1966). This little history lesson involves many failed films, reused plots, and a few cases of copyright fights that have yet to be fully figured out to this very day.

Before War of the Gargantuas

And every good story has to start somewhere, as such let’s travel to the year 1961 where legendary special effects artist Willis O’Brien, who worked on the effects in the original King Kong (1933), proposed a new film titled King Kong vs. Frankenstein or King Kong vs. The Ginko. In his treatment, a somehow surviving King Kong is pitted against a large monster composing of animal body parts made by Victor Frankenstein’s grandson. Yes, that’s right, the man behind the effects for King Kong wanted to make a film where the giant ape fights a giant-sized Frankenstein.

In the film treatment, O’Brien had fleshed out a full story treatment and concept art as he normally does for his projects. At this point in his career, O’Brien (who was mourning the death of his children) was stagnant in his ideas. While he had worked on moderate monster movie hits like the Black Scorpion and The Giant Behemoth as well as helping launch the career of his disciple Ray Harryhausen, O’Brien wanted to find a way to elevate his special effects career. So what better monster to do that with than King Kong? As for Frankenstein, O’Brien was a fan of both the original novel by Mary Shelley and Universal’s film adaptation in 1931, even wanting to make an animated adaptation of the book that never came in fruition.

O’Brien tried to take his treatment to the studio by produced King Kong RKO, but at this point, RKO was no longer a production company and at the time it was assumed Universal own the copyright to the character of King Kong as they had licensed the character several times. He then met with producer John Beck and Beck loved the idea and promised O’Brien he would make the film into reality.

But this would be a mistake on O’Brien parts. Beck first had screenwriter George Worthing Yates rewrite the treatment as King Kong vs. The Prometheus (an homage to the alternate title of Shelly’s novel). Beck then tried to shop the script to many film studios, but they were discouraged due to the potentially high cost of the stop motion effects. But Beck essentially stole the project idea from Willis O’Brien as he never invited O’Brien to these pitches and most likely didn’t had him in mind to work on the effects. As such Beck looked for overseas studios who would be willing to fund the project. Enter Toho Studios.

Toho, who was not only planning on reviving Godzilla who was figuratively and literally hibernating for several years after the release of 1955’s Godzilla Raids Again as well as a major film to celebrate the studios 30th anniversary. So when they caught wind of Beck’s film proposal, Toho smelled a golden opportunity. Beck met with Toho and Godzilla co-creator Tomoyuki Tanaka to negotiate over the film treatment.

Tanaka was interested, however, he only desired King Kong. The giant ape was immensely popular in Japan (so much so that is was a major inspiration for Godzilla himself along with some of the first kaiju films being unofficial Japanese Kong films that are sadly lost). Tanaka and Beck negotiated over the film and eventually agreed Toho would have to pay 80 million yen (less than 730 thousand USD) for the treatment just to get Kong along with negotiations with RKO and Universal for the character rights.

Tanaka then had Toho screenwriter Shinichi Sekizawa, who has written several other entries in the Godzilla series, completely rewrite Yates’ screenplay to remove all references of Frankenstein (though some elements remain such as Kong getting stronger from electricity) and pitted the giant ape with Godzilla. When O’Brien learned of this he was devasted to see his last passion projected practically stolen and butchered along with him not providing any of the effects. This is saddening as King Kong Vs. Godzilla’s special effects director Eiji Tsuburaya heavily admired O’Brien’s work and even had a few scenes of stop motion in tribute to his work.

And in 1962 the final film would be released as King Kong vs. Godzilla with Universal Pictures releasing a modified version for the western release. The film was a monumental hit in both Japan and in the US, but that doesn’t mean everyone was happy. As said before O’Brien felt insulted by what happened to Kong as while the film is certainly not terrible (the original Japanese cut at least), the Kong suit is definitely not up to par with Tsuburaya’s other creations.

And a few months later O’Brien would pas away as his colleagues would say he died of “sadness and tragedy”. In fact, Ray Harryhausen resented Toho not only for their portrayal of Kong but felt Godzilla wouldn’t have been a hit without his film The Beast from 20,000 Fathoms (which was another inspiration for the original Gojira).

And then came the legal battles.

‘King Kong vs Godzilla’ and ‘Universal vs RKO’

After the release of King Kong vs. Godzilla, one of the original King Kong writers and directors Merian C. Cooper filed a lawsuit against Beck, RKO, and Universal over ownership over the right of King Kong. And while he claimed he had letters to prove ownership, he wasn’t able to provide them in court and the case was dismissed in court with Universal claiming to own the copyright, though Cooper did own the rights for the novelization (which he had his friend Delos W. Lovelace write for him in 1932). This would begin a very long history of King Kong being in a very dubious legal limbo that plagues the character to this very day.

Back over to Japan, with the success of King Kong vs. Godzilla, Toho wanted to continue this by having Godzilla fight another monster so why not have Godzilla fight, Frankenstein? As such Toho had screenwriter Takeshi Kimura write a film treatment titled Frankenstein vs. Godzilla. In the script, a pair of scientists studying the effects of radiation on humans discover a boy immune to the energy. It turns out the boy is a resurrected monster made from the heart of Frankenstein’s creation. He was exposed to the nuclear bomb of Hiroshima and transforms into a monstrous being that begins to eat people. From there the J.S.D.F. decides to reawaken Godzilla to fight the mutated boy – seeing the kaiju as the lesser of two evils.

While Toho seemed impressed with this film treatment, they decided to greenlight Shinichi Sekizawa’s screenplay he also submitted that would later become Mothra vs. Godzilla as 1961’s Mothra was a box office giant in Japan so in their eyes having Godzilla fight, Mothra would be the safer bet. However, a good idea wouldn’t be fully wasted. In 1965 Toho was part of a partnership with American distributor UPA to help co-finance many of Toho’s kaiju films as the 1960s would be considered the “Golden Age of Kaiju Films”.

Co-producer/financer Henry G. Saperstein loved the idea of a kaiju Frankenstein film and wanted to revive the Frankenstein vs. Godzilla treatment in some way. As such Kimura rewrote the treatment to have Frankenstein be a much more sympathetic monster and not cannibalistic along with replacing Godzilla with a new monster in the form of the subterranean dinosaur Baragon. The final film, titled Frankenstein vs. Baragon in Japan and Frankenstein Conquers the World internationally, was released in 1965, but not without its hiccups.

Saperstein, who was a fan of the giant octopus scene in King Kong vs. Godzilla, requested an ending where another giant octopus would appear out of nowhere and drag Frankenstein into the ocean. While director Ishiro Honda and the rest of the crew opposed the idea, they filmed it anyway and this would become the ending to the international release of the film. It would go on to be considered a lost ending until the film’s DVD release.

A year later Toho and UPA would co-produce a sequel to Frankenstein Conquers the World which was titled Frankenstein’s Monsters: Gaira vs. Sanda in its 1966 Japanese release. In the sequel, the film opens with the giant octopus from the alternate ending attacking a fishing vessel, only to be killed by the green goliath Gaira. It turns out Gaira is spawned from the cells of Frankenstein and goes on a rampage in Japan, consuming many humans, which seemed to be a plot point carried over from the original Frankenstein vs. Godzilla.

But Gaira gets in a conflict with his brother Sanda who’s also not only spawned from Frankenstein’s cells but was raised by humans. Sanda grew up and became a gentle giant while Gaira was raised in the wild and became a wild beast. The two monsters battle it out until dying from an underground volcano. While the film was also a big hit in Japan, it took until 1970 to get a western release and was “de-sequelfied” by not only removing references to Frankenstein in the dub but was retitled as War of the Gargantuas. And the rest was history.

The Legacy of the War of the Gargantuas

And here we are, from King Kong to Godzilla and finally to Frankenstein, this strange road would be the route to the creation of one of the most popular films among kaiju fans. Ever since its release in 1966, War of the Gargantuas would be garnered a massive cult following to which many film professionals would be hailed it as one of their favorite kaiju films from Guillermo Del Toro, Quinten Tarantino, Tim Burton, to even Brad Pitt.

The Gargantuas themselves would be fan-favorite kaiju appearing in different media and even referenced in works such as Scooby-Doo and Crank 2. The film is a testament to how one should never let a film idea go to the wayside. Sure the first film treatment from Willis O’Brien looks absolutely nothing like the final product but it’s clear many of these films that saw the light of day were made by some of genre film’s greatest talents. If this nonsense is what was necessary to create War of the Gargantuas, it can be seen as a necessary evil to create one of the finest films in the genre.