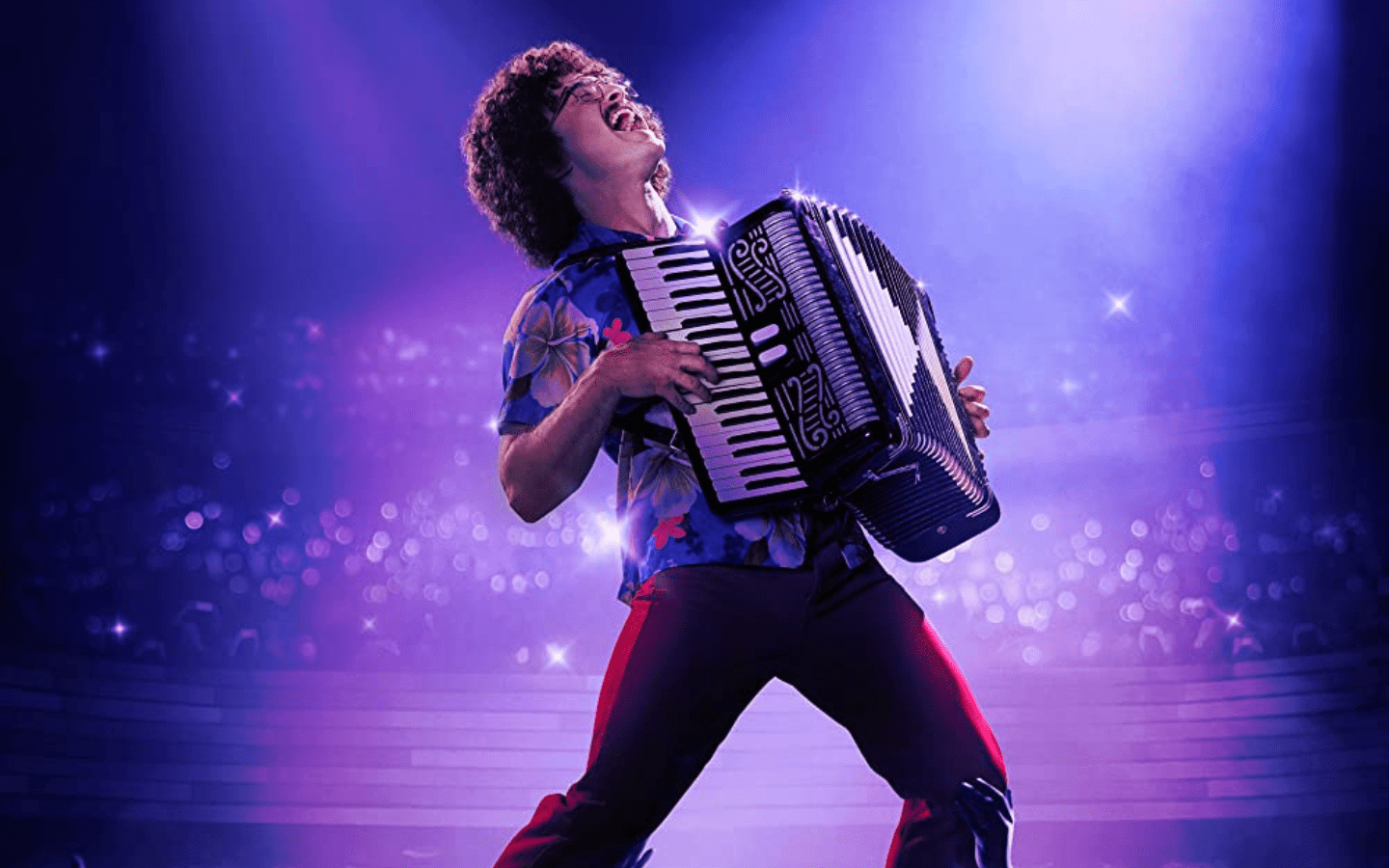 Have you ever enjoyed a song to the point that you thought, “Here’s my spin on it!” Although you aren’t Weird Al Yankovic, you’re certainly channeling his energy and for my money, I say belt it out! Weird: The Al Yankovic Story tells the story of Al, as written partially by Al, and delivered in only a way that Al could.

In a conversation amongst your peers, ask them,” Who is the most famous parody artist you know?”  “Weird” Al Yankovic should have the top honor for this and if not, evaluate those friends.  He has had a career longer than many lifetimes making music with many instruments and making reworkings of various radio hits.

Weird: The Al Yankovic Story has a run time of 1 hour 48 minutes and was written by Eric Appel and Weird Al Yankovic, directed by Eric Appel, and stars Daniel Radcliffe and so many more people it would make your head melt with the quantity, and quality as high as it could possibly be. The movie is currently a Roku Channel exclusive, and you DO NOT need a Roku or a Roku account to view it.

Accordion To Weird Al, It’s His World And We’re Just Living In It!

In an industry that churns out beautiful, glistening, and chiseled machines that seem to have no end to their talent, Weird Al arrives to turn that on its head. Or does he? In this movie, we are given one of the best gifts imaginable: A parodist’s parody of their own life.

His trademark Hawaiian button-up shirts, accordion, mustache, and curly-fry locks all play a huge part in this spectacle.  It is a remarkable recalling of his life, in only the way that Weird Al could write it, with Eric Appel.

Weird: The Al Yankovic Story is such a robust parody, going from his childhood into his stardom days, peppering in all of the people you would expect him to interact with.  They give light into his passion for music, how it gets him into trouble, and how he spirals as a part of being in the spotlight.

Daniel Radcliffe delivers a sensational presentation as Weird Al, presenting him as being hilarious without his choosing and so serious, its odd we missed that.  Weird Al is narrated by Diedrich Bader, providing the gritty and reflective tone we have all known and loved Weird Al for (are these my real feelings or am I writing the parody now).

Weird Al came to prominence in the 80s and 90s as his songs were such silly representations of inescapable earworms.  Or is it that they are the originals and everyone else’s songs are parodies?  Weird Al makes it clear, we need ot have this discussion post-haste, if not yesterday or the year before.

However, like all comedy and comedians, there is a lingering miasma of darkness looming in the air.  The family of Weird Al and how they take to him, when he decides he has found his passion.  It is a battle that he fights many times throughout his life and one that may very well still be going on, if we could only ask him we would know.

Weird: The Al Yankovic Story is a masterpiece in cinema. It bridges riotous laughs, vindictive violence, and the different settings of the world that this multi-platinum musical superstar must go, to live his life.  How does Weird Al find success in so many avenues?

Weird: The Al Yankovic Story helps us find so many meaningful connections with one of the premier musical artists of the United States.  It shows us him at his best and his worst, his purest and his most soiled. When I watched this, I felt like I knew Weird Al my whole life, and yet I was only watching Daniel Radcliffe act it out!

I think that if you are looking for a comedy that is unafraid of risks, invested in creating worlds you’re not familiar with in comedy, and a biography on someone you know a little about, I have found it for you. Weird: The Al Yankovic Story is a great entry for the roaring 20s. That’s 2020s not 1920s, although, maybe Al has some developments there too.  I give this a solid 10/10, it is rewatchable with Easter eggs, cameos, and pause-to-read scenes.  Kudos to Weird Al, Eric Appel, Daniel Radcliffe, and EVERYONE that made this movie and made it so special.

Did you see Weird: The Al Yankovic Story?

We hope you enjoyed our review of Weird: The Al Yankovic Story. What did you think about the movie? Let us know on social media!