What Order To Watch The Monsterverse Movies

Want to know what order to watch the Monsterverse movies? Well, we got you covered! 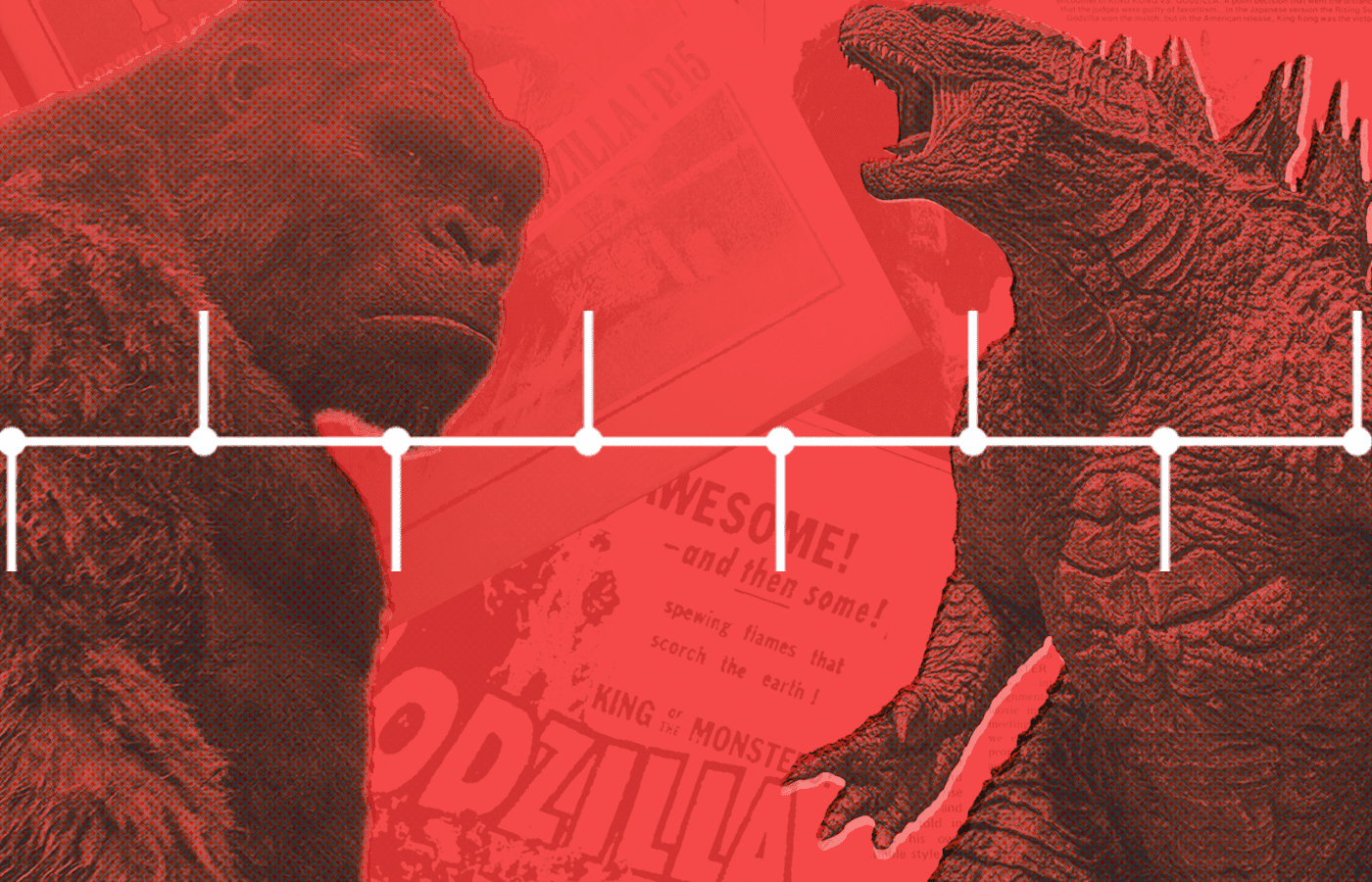 What Order To Watch The Monsterverse Movies

So it seems the Monsterverse is still ready to rampage across the big (and small screens) soon. We have confirmation via Production Weekly that Legendary’s upcoming Godzilla vs. Kong sequel will in fact be a new Kong film titled “Son of Kong” with Godzilla vs. Kong director Adam Wingard returning to direct. Not to mention we are getting a Godzilla-centric Monsterverse series exclusive to Apple TV+and an anime tie-in to Kong: Skull Island heading to Netflix so it’s safe to say we’ll see more of this kaiju shared universe.

Despite being a smaller cinematic universe compared to the likes of the MCU and the DCEU, some areas till a little confused about what order to watch the Monsterverse movies as these films have some decent gap between them when compared to the almost twice/three times a year the MCU releases a film. As such here is a quick little guide on what order to watch the Monsterverse movies chronologically.

RELATED: 10 Things We Want To See In The Godzilla vs. Kong Sequel

While Kong: Skull Island was the second entry of the Monsterverse, it is the earliest film chronologically in the Monsterverse as the film takes place in 1973, right at the end of the Vietnam War. In the film, the unifying element of the Monsterverse, the enigmatic organization Monarch, is a rather minor operation as we only see two major members with John Goodman’s character William “Bill” Randa and Corey Hawkins’ Houston Brooks. Since Monarch is a much smaller organization, their knowledge of the kaiju, or rather the in-universe term “Titans” is rather small, and major elements such as the Hollow Earth have yet to be fully explored.

The film itself is a great throwback to “mysterious island” films of the 1960s and director Jordan Vogt-Roberts creatively reimagines the classic Kong story with a Vietnam War-era flavor. The Kong we encounter is rather young and has yet to become the beast to rival Godzilla, so it’s almost like a hero’s journey with a giant ape. What more could you want?

RELATED: The Road To Godzilla vs. Kong: Looking Back At Kong: Skull Island

Godzilla (2014) was directed by Gareth Edwards with the screenplay written by Max Borenstein. It stars Aaron Taylor-Johnson, Ken Watanabe, Elizabeth Olsen, Juliette Binoche, Sally Hawkins, David Strathairn, and Bryan Cranston. The plot follows a grieving widower and his son trying to find answers for a nuclear “accident” that killed the wife of the family. They soon learn that massive radiation feeding creatures known as MUTOs have awakened and soon their presence alerts the alpha Titan Godzilla.

The first film in the Monsterverse and the second film chronologically, Godzilla (2014) is an interesting entry in this little guide. There weren’t really any plans for a shared universe as Legendary simply conceived this film as a reboot for the then dormant Godzilla franchise (which hadn’t had any new film since 2004’s Godzilla: Final Wars). As such, the world building was minimal to explain the existence of this incarnation of Godzilla and his adversaries, the MUTOs.

In the film, it was explained simply that Earth used to have higher levels of radiation in prehistoric times that helped produce an environment for colossal creatures like Godzilla. Monarch themselves again seemed much smaller but in terms of a more secretive organization with Ken Watanabe’s Doctor Ishiro Serizawa and Sally Hawkin’s Dr. Vivienne Graham to represent the organization. The film shows events the earliest within the timeline as we see classified footage of the USA government’s attempts to kill Godzilla in 1954, but overall the major events in the film take place in 2014.

RELATED: The Road To Godzilla vs. Kong: Looking Back At Godzilla (2014)

Godzilla: King of the Monsters was directed and co-written by Michael Dougherty with Zach Shields co-writing the screenplay. The cast includes Kyle Chandler, Vera Farmiga, Millie Bobby Brown, Bradley Whitford, Sally Hawkins, Charles Dance, Thomas Middleditch, Aisha Hinds, O’Shea Jackson Jr., David Strathairn, Ken Watanabe, and Zhang Ziyi. The plot follows five years after Godzilla (2014) as Monarch has to face a band of eco-terrorists that includes a traitorous member of their organization as they awaken several Titans such as Rodan, Mothra, and the three-headed space dragon King Ghidorah. Soon Godzilla returns to tries to restore balance and battle Ghidorah, who was a rival to Godzilla in ancient times.

A true sequel for the Monsterverse, Godzilla: King of the Monsters goes bigger in every way than both its predecessor and Kong: Skull Island. The Monsterverse is in full swing as Monarch has been expanded to the kaiju version of Marvel’s SHIELD with dozens of members as main characters and futuristic tech and bases. We also get dozens of Titans from Toho classics King Ghidorah, Mothra, and Rodan to new faces in the film’s climax.

Godzilla: King of the Monsters also addresses the mysterious Hollow Earth as we explore the ruins of a temple that was meant to be Godzilla’s home, thus adding new layers of lore to the Titans. Some returning characters from Kong: Skull Island make a return such as Houston Brooks (now played by Joe Morton) along with mentions of Kong reference throughout the film. But as seen during and after the credits, we get a major tease of a culmination happening in the next film.

RELATED: The Road To Godzilla vs. Kong: Godzilla: King of the Monsters Retrospective

Godzilla vs. Kong was directed by Adam Wingard. The screenplay was written by Eric Pearson and Max Borenstein. The cast includes Alexander Skarsgård, Millie Bobby Brown, Rebecca Hall, Brian Tyree Henry, Shun Oguri, Eiza González, Julian Dennison, Lance Reddick, Kyle Chandler, and Demián Bichir. The plot follows several Monarch agents who have to ally themselves with the enigmatic APEX Cybernetics to both find Kong a new home and find a mysterious energy source within the Hollow Earth to stop Godzilla who has gone rogue, though it may be because of the sinister machinations of Apex themselves.

The last film in this guide of what order to watch the Monsterverse movies, Godzilla vs. Kong is the culmination of many plot threads seen in the past three films has been building to Godzilla and Kong facing off. The Monsterverse was in fact essentially created for this match-up as Legendary repurposed Kong: Skull Island to have ties with Godzilla (2014) as they wanted to have Godzilla and Kong face-off again since their first battle in 1962’s King Kong vs. Godzilla, thus the creation of the Monsterverse.

Godzilla vs. Kong is essentially The Avengers of the Monsterverse as many elements and characters from both Godzilla and Kong crossover and to finally explore the origin place of the Titans: the Hollow Earth. The film also brings in another classic Toho kaiju with Mechagodzilla, whose computerized brain was created from the remains of King Ghidorah. And unlike other failed cinematic universes, Godzilla vs. Kong reached its goal of a crossover film with the biggest rematch in monster movie history.

What Is Your Favorite Monsterverse Movie?