It Chapter 2: When We Are At The Center Of Horror

Don and Richie’s stories represent countless queer tragic stories that never got to be addressed nor see justice. 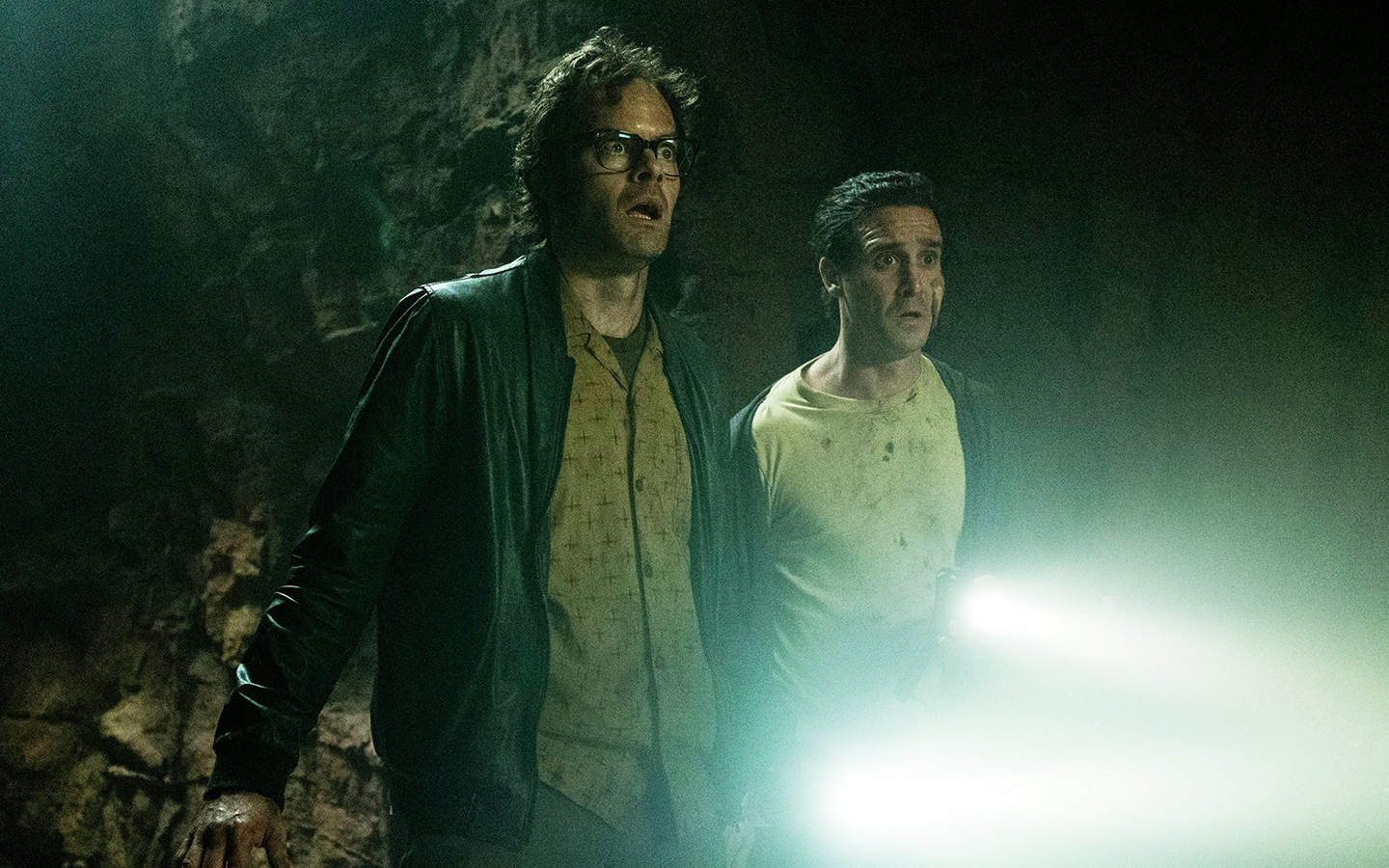 It Chapter 2: The Queers Next Journey

In September 2019, the online horror community witnessed the sequel to one of the most anticipated films of the year. A sequel to one of Stephen King’s most acclaimed stories, It. Once again, we accompanied the Losers Club’s quest to destroy the terrifying and cosmic entity of fear known as Pennywise in the town of Derry, Maine, 23 years later after the events of the first film.

As we grapple with the adult lives of Bill, Beverly, Ben, Richie, Stanley, Mike, and Eddie, we see how trauma has changed them and followed them in their daily lives. However, the terror I’ll explain in this essay is the terrifying opening scene of It Chapter Two (Directed by Andrés Muschietti) and is a subsequent silent journey. The opening scene is a hate crime against a gay couple that not only delivers a lot of punches in the face but also places its existence in the abyss soon to be forgotten. Its essence is felt throughout the movie, but again, left in the abyss.

The beginning of It Chapter Two shows Adrian Mellon and his boyfriend Don Hagarty attending a carnival at night. As they have fun, they also talk about desiring to escape to a better place than staying in a small town. Their journey is cut short when a group of homophobic teens witness Adrian and Don kiss. As the confrontation between the couple and the hate group occurs, Adrian and Don decide to ignore them and leave.

Still thinking about their future, it’s cut short again when the gang assaults them. Adrian is beaten viciously while Don painfully watches it. Adrian is thrown to the river and tries to swim back to the surface only to be caught by Pennywise. Don tries to find Adrian until he sees Adrian’s last image of being eaten by Pennywise while the homophobes run away from the crime scene.

As the first blood in twenty-three years is dropped, the following events paved the way for Mike Hanlon to realize that Pennywise has returned; prompting him to call the rest of the Losers Club to travel back to Derry. Meanwhile, Don’s story has ended in vain and then vanishes.

The audience has been struck by a terrifying hate crime that was displayed in a mainstream movie which for the LGBTQ+ audience, their experience goes deeper as they understand both sides of the story, a story of tragedy and a story of erasure. The scene was controversial due to its graphic violence but also, the small development of these gay characters whose story was never addressed further on nor we see Don’s changed life after the crime.

Mixed feelings are acceptable in the portrayal and justification of the scene in which Stephen King based it on the murder of Charlie Howard in his hometown of Bangor, Maine. However, the further development of justice and trauma that follows the hate crime isn’t included, leaving an open ending to Don’s character arc. On the other hand, the audience is introduced to another queer side story centering on Richie’s hidden feelings for Eddie but also his struggle with his queer identity.

Richie’s queer identity is addressed during a childhood flashback when he plays Street Fighter with Henry Bower’s cousin at an arcade. Richie wants to keep playing with his immediate crush only for Henry Bower to come and say homophobic slurs at Richie. Richie runs to a park where he cries only to face up against Pennywise who mocks him by saying “Richie’s dirty little secret”.

Once again, Richie’s queer identity ignites a personal fight in the closet by escaping the darkness and fight against Pennywise who holds the closet’s door. As Richie’s story goes, his friendship with Eddie is presented via flashbacks to remind the audience of how friendship can defeat evil, but on Richie’s perspective, his bond with Eddie is much deeper. Unfortunately, this bond ends with a profound tragedy during the final battle against Pennywise when Eddie saves Richie from being eaten but is stabbed in the chest by one of Pennywise’s gigantic claws.

In their last moment, Richie tries to save Eddie and confess his deepest feeling to him, but their last words are instead switched to jokes rather than an explicit moment of love and friendship. In the aftermath, Richie mourns Eddie’s death while the rest of the gang console him knowing that he has support. In the final scenes of each Losers’ stories, Richie manages to express subtlety his love for Eddie by carving “R + E” on wood near a bridge. This is his final moment of queer expression which leaves the audience with another open arc for his character.

No matter how It Chapter Two ended the Losers Club story, the LGBTQ story is still open in the air. Last year, I explained in a personal essay how this movie impacted me while I analyze its queer storylines. As the tragedies were transmitted in my brain, there was also hope among its transmission. Recalling my memories of how the hate crime scene played out, it’s astonishing how one member of the theater audience was disgusted by Adrian and Don’s kiss and later stayed silent when the crime scene occurred.

The way that this hate crime scene unmasked the audience was a deep social experiment that evaluated human attitudes on human rights issues as we are currently seeing in viral videos of human injustices caught in the media. As a viewer, the hate crime was terrifying and knew that its aftermath will be left in the dust. As a writer, reviewing this scene made me care more about the lives of Adrian, Don, Richie, and Eddie that even I came up with ideas to further develop their stories.

For example, at some point, Richie and Don meet up and talked about Adrian’s death while facing the wrath of Pennywise and homophobia. They might even battle together and become friends during and after Pennywise’s death as they fight other social issues. There’s also the possibility that both go on separate journeys of facing a new supernatural element that puts their existence to a test.

Even though these characters have supporting and minor roles in the film, their stories could expand to other areas in the Stephen King universe. We’ve seen this with The Shining sequel, Doctor Sleep which continues Danny Torrance’s storyline and the second season of Castle Rock which expands the role of Annie Wilkes as a prequel to Misery. Thankfully with the Stephen King renaissance, more supporting characters can have a more expanded story and a well-rounded character development.

Like most Stephen King’s works, the theme of facing trauma appears in countless adaptations; thus, Don and Richie’s stories must be expanded to address these issues especially coming from two queer men whose identity is being endangered by bigotry and erasure. In addition, Don and Richie’s stories can provide hope for queer people who are currently facing discrimination and violence around the world. On the bright side, the horror community has been lately witnessing a resurgence of Queer Horror content that places queer people at the center of supernatural and human violence while adding social commentary inside and outside of the queer community.

As a Queer Horror writer, I’m personally invested to create these stories since for a long time I dreamed to see queer characters put in peril in the same standard as heterosexual characters. Queer people in horror were represented as props while queer themes were represented as the otherness that threatens the so-called, normal perfect society. So, as times change and the horror community evolves, queer stories have the potential and the right to express themselves in situations of peril, survival, and hope as they try to change the world for the better.

Don and Richie’s stories represent countless queer tragic stories that never got be addressed nor see justice. In these turbulent times where a pandemic has impacted human civilization and the ongoing police brutality rooted in racism which ignited a groundbreaking social movement, there are more stories who deserve justice against injustice. Horror and Sci-Fi are the best realms to tackle these issues among many others and we as the artists must continue doing the right thing.

This Pride Month may have been clouded by the ongoing fear and violence perpetuated by these two global events, but hope is rising because there are people who care about injustice and want to fight it. Let’s continue uplifting the voices of the voiceless and provide change for a better world that Adrian, Don, and the Losers Club wanted to achieve.