Willy’s Wonderland Is a Meme of a Movie

In Willy’s Wonderland, even Nicolas Cage can’t save you from a bad time. 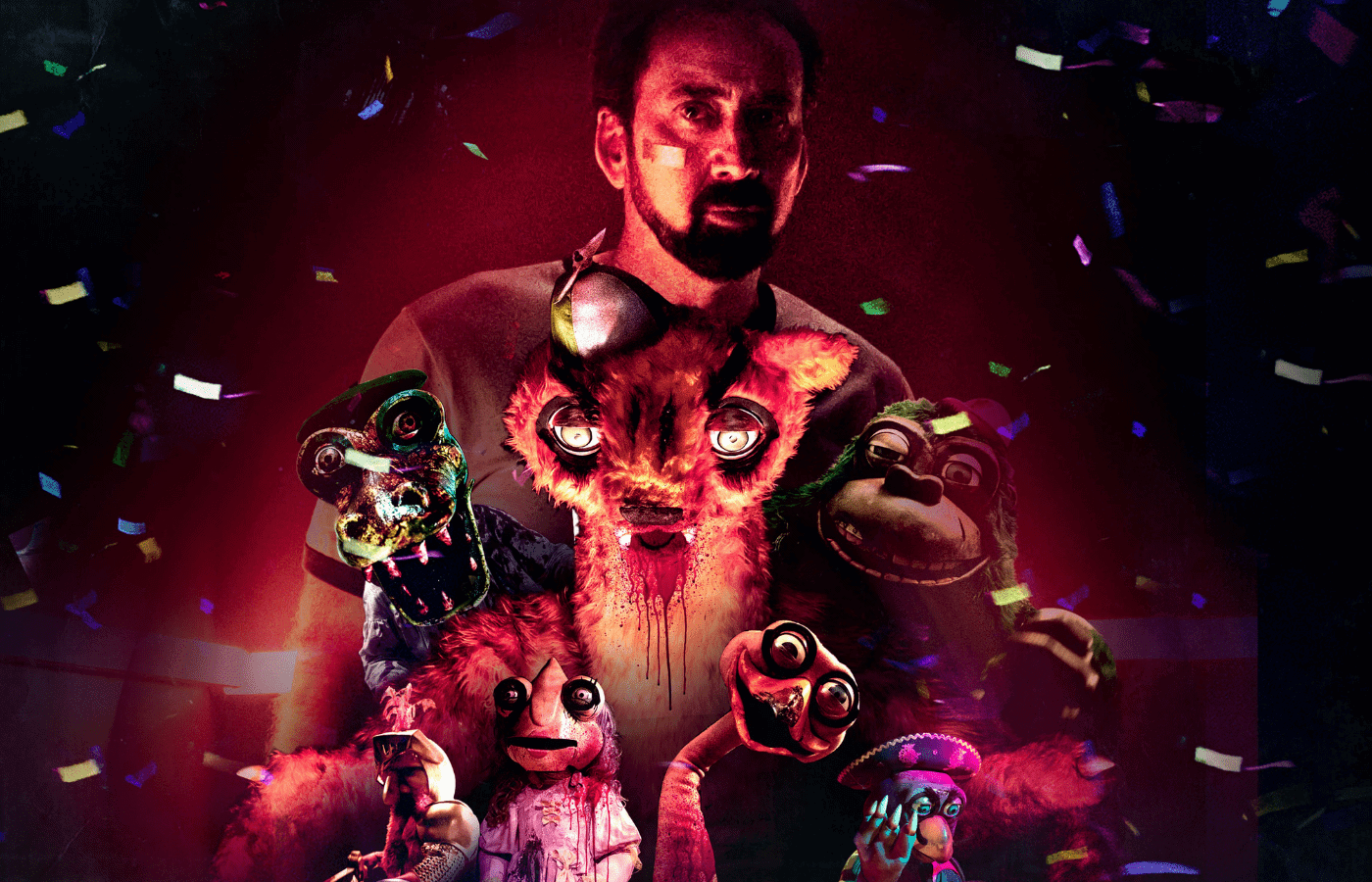 In Willy’s Wonderland, even Nicolas Cage can’t save you from a bad time.

It’s safe to say that, following the release of Mandy and Color Out of Space, Nicolas Cage is out of his “dark period,” the era from approximately 2004 until 2013 where Cage went from puzzling but often beloved character actor to a critical punching bag.

Cage himself was never truly a bad actor, he simply made a string of strange career choices that can be traced back to his Oscar win in 1996, when he shifted from smaller roles in more intimate and quirky films to largely action and leading man roles in films ranging from the successful Face Off and The Rock to the critically maligned remake of The Wicker Man and widely memed about National Treasure. It was only with the release of David Gordon Green’s Joe that Cage was able to regain the critical favor that was solidified with the back-to-back genre thrills of Mandy and Colour Out of Space.

Willy’s Wonderland, on the other hand, feels like a throwback not just to that bygone era where Cage films were more notable for their utter absurdity than their craft, but also a throwback to the post-Grindhouse era where a slate of genre films seeking to self-consciously emulate the nutty glee of 1970s and 1980s genre films were released. Some of these films include Hobo With A Shotgun, Hell Ride, and the aforementioned Grindhouse double feature of Planet Terror and Death Proof.

These are films that were typically front-loaded with a plot gimmick (stripper with a gun for a leg, Hobo who has a shotgun, car that kills) and many of the films of this era were content to rest on concept alone and replace consistent craft with a few stylistic touchpoints – film grain, canted angles, quick zooms. There’s a reason why a lot of these films aren’t generally talked about much today and, unfortunately, Willy’s Wonderland looks primed to join the landfill.

Willy’s Wonderland opens with Cage, clad in leather-jacket and NASCAR Dad sunglasses, doing cool things with his car, until he runs over a spike strip and ends up with a flat tire. A local gives him a ride and offers to fix his car, but only for a steep 1,000 dollars. When Cage, known here only as The Janitor, can’t pay the mechanic, he hooks Cage up with Tex Macadoo, played by Ric Reitz in a performance of faux-cowboyisms that leaves just about no impression.

Tex is the owner of Willy’s Wonderland, a sort of Chuck-E-Cheese kids’ party place where The Janitor can earn the money to fix his car by cleaning the vacant party place. The Janitor accepts, not realizing that Willy’s is actually inhabited by animatronics possessed by serial killers who ritualistically take sacrifices on behalf of the town. It’s an absurd premise, and it makes for a great trailer, but the film itself doesn’t even remotely hold up to scrutiny.

Some of the blame must be laid at Cage’s feet. The actor has been a reliably chaotic presence in film since the mid-80s, but here he’s instructed to stand in badass poses for most of the runtime, making his stoicism an absurd joke that only sporadically works. There are enjoyable moments that feel distinctly Cageian: the fact that Cage insists on looking like he’s having sex while he plays pinball, a moment where Cage gets in fighting pose only to leave when his watch sounds off to let him know it’s time for a beer.

But Cage is barely committed, never luxuriating in the insanity like he’s known to do. He’s so detached from the proceedings throughout that the stakes feel totally non-existent, as any enemy that gets in his way is destroyed quickly and with little to no variety in how they’re dispatched.

Most of the film plays like a clumsy student film

The most successful of the exploitation homages that were alluded to above were the ones that managed to establish a strong aesthetic identity within the confines of their playful pastiche.

Willy’s Wonderland seems to be consistently straining for this aesthetic but is never committed beyond stylistic tics (the film loves tilted angles, ominous zooms, quick editing) but only in the film’s quieter moments does it commit to this look, favoring instead quick shaky editing when it comes time to transition into action. It doesn’t help that this is the rare horror-comedy that ends up feeling repetitive, continuously setting up scenarios where the hapless teenage characters who come to Cage’s rescue end up alone with an animatronic and are brutally killed. The kills all roughly look the same; for the most part, the animatronics bare teeth and simply tear the teenagers apart.

While on the subject of the teenage characters, it’s astonishing how little of an impression they make. Beyond Liv, played by Emily Tosta, who’s ostensibly the film’s final girl along with Cage, the teenagers seem defined more by their look rather than their actual personality (one has longer hair, one wears a leopard print jacket, one even has glasses!). Their performances are fine, but no one ever seems to rise above simply saying their dialogue, and by the time they’re dispatched, you don’t find yourself missing them or feeling any reaction to their death.

It’s unfortunate, since the filmmakers do have an opportunity to sneak likable characters into the film, knowing that most viewers are likely coming to see Nicolas Cage anyway. There seem to be several unused opportunities for subversion throughout the film, but I especially wanted to see the film borrow a bit from something like Big Trouble In Little China and perhaps portray Nicolas Cage as an incompetent hero who can’t survive the night without the aid of these local teenagers. But instead, the film is content to just let these teenagers be meaningless victims who are there only to provide Cage with opportunities to pose dramatically and glower at animatronics.

And this may all be, to some extent, by design. Willy’s Wonderland never seems to intend to be Cage’s next Mandy, a genre vehicle drenched in cliches that manages to transcend those cliches through its intense stylization. The film is very proudly what it’s advertised to be: Nicolas Cage fighting robots in a Chuck E. Cheese knockoff. As a result, there are still occasional enjoyable moments, especially an early fight with the gorilla animatronic that has an intensity that some of the film’s other action sequences lack.

It is a film that is comfortable looking and feeling like it spilled fully formed from a 12-year-old boy’s imagination and that giddy glee and reckless absurdity still comes through in moments where the technique is lacking. And even if the film intends to be a long cinematic joke that provides a few easy laughs, a saving grace is Beth Grant’s performance as a small-town sheriff torn about her role in the sacrifices the town makes to these malevolent animatronics. Grant is extremely down-to-earth in the role, and her performance feels earnest even as the proceedings get increasingly chaotic and absurdist.

Willy’s Wonderland has a heartfelt nostalgia built into it, but it feels secondhand…

There is a love and care that comes through in stray moments of Willy’s Wonderland, especially in the forms that the animatronic villains take. Taking the forms of everything from fairies to weasels, the animatronic characters feel lovingly rendered and authentic, not being embellished to seem creepier than their vacant eyes and constant grins already are. It feels like there is care taken in designing these antagonists, making sure that they feel authentic to the collective nightmares of children traumatized by the Country Bear Jamborees of the world.

And the film even includes one mascot, Tito Turtle, who feels like a relevant bit of satire, poking fun at the way corporations co-opt and appropriate cultures to make easy jokes that kids can laugh at. But the film’s era-signifiers feel stitched together not from actual experience, but rather from YouTube edits of Chuck E Cheese commercials and, even worse, the film can’t provide something authentic and new that separates it from the similar Five Nights At Freddy’s video game franchise.

Additionally, the film makes it clear that the nostalgic aspects are intended more as a joke than anything else. The preponderance of goofy songs are authentic, sure, but they’re mostly used to add a humorous edge to fight scenes, and they’re not particularly successful at accomplishing that either. And the film’s score, filled with synths and heavy guitars, tries to establish the nostalgic sensibilities but doesn’t bother to enhance mood and mostly ends up repeating itself over and over: droning synths for moody horror sections, loud guitars for any time Nicolas Cage does something cool. It is pure formula, lacking real authentic love.

The aesthetic sensibilities make one wonder if Willy’s Wonderland is intended to be a good film or just a good trailer?

In the past ten years or so, one could say that a new subgenre of film has emerged: trailer films. These are films that have amusing gimmicks and make for humorous trailers that often end up going viral. The subgenre perhaps started with The Human Centipede, but films like Willy’s Wonderland and the recent Butt Boy prove that the genre still exists. And that’s perhaps the greatest flaw with Willy’s Wonderland: it seems to know exactly what kind of movie it wants to be, but it’s not able to be that movie for longer than a few minutes.

Instead of bothering to be authentically scary or funny or suspenseful, it seems like a pre-made meme template of a movie, with easy signifiers and obvious jokes threaded in, all with the goal of getting people to say, “Did you see that movie where Nicolas Cage fights robots in a Chuck E Cheese?” The film doesn’t lack for midnight movie potential and there may be a day where people enthusiastically don Willy’s Wonderland shirts and dress as the film’s animatronic mascots, and that makes it all the more unfortunate that the craft and heart seems to be missing that.

Let us know what you thought of Willy’s Wonderland over on social media!