All three of these women are heroes in their own way and show an evolution over the decades of not only the female struggle against the zombie hordes, but also the path women have traveled in American history. 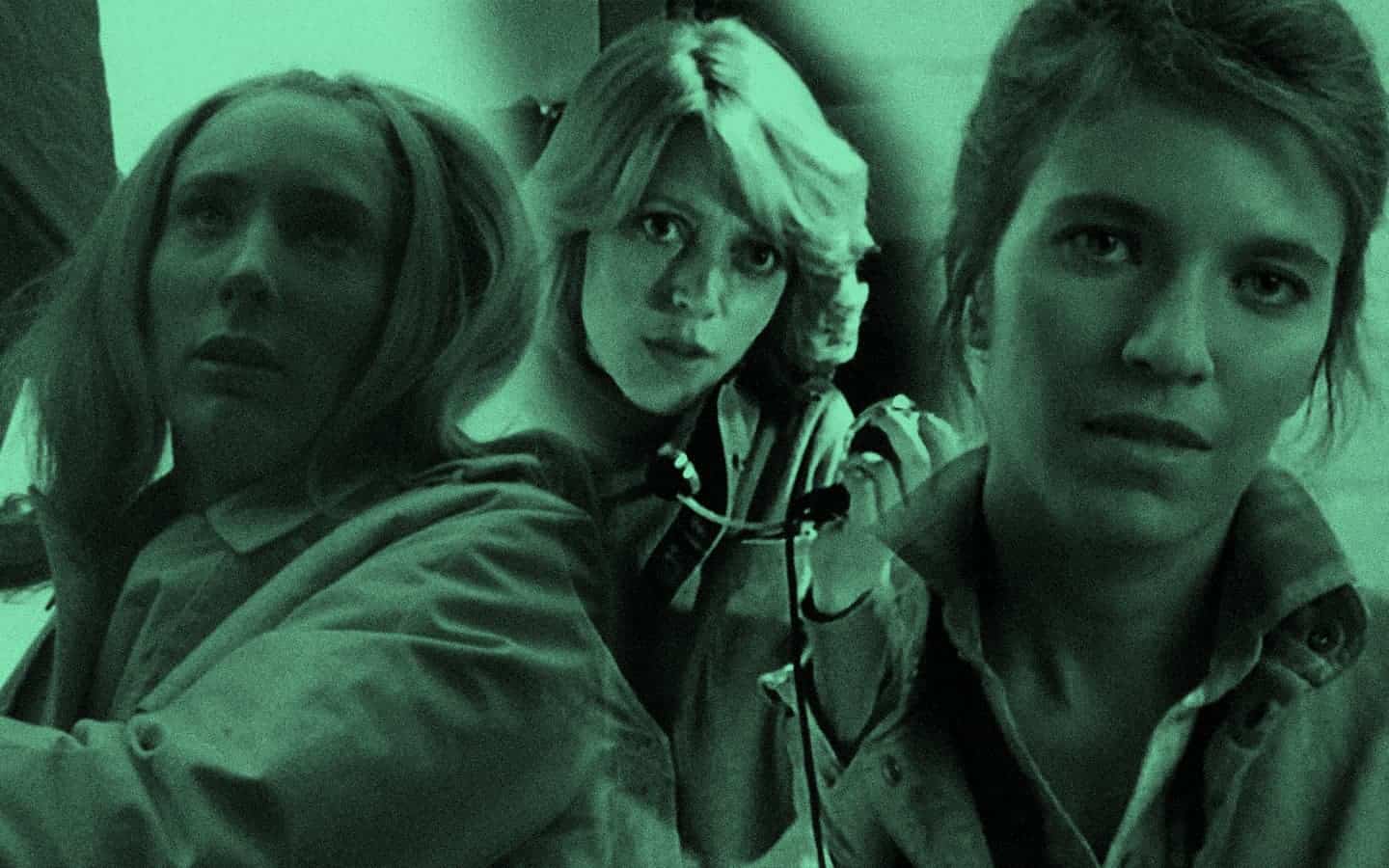 How George A. Romero’s original zombie trilogy shows the evolution of women’s liberation in America.

What I love about George Romero’s films is that they weren’t really about the zombies outside the doors, but the people inside struggling to survive. From talking about how we no longer have the ability to work together or how consumerism and capitalism were pitting us against each other, Romero used his films to get us to think about some pretty big ideas.

We come for the roller-coaster ride filled with fun and gore, but we keep coming back because he had a lot to say about society. Romero himself stated that each of his Living Dead films was a mirror on the decade it was made in. For me, another important element of the original Dead trilogy is how these films show an evolution of how life changed over time for women living in America. Barbara, Fran and Sarah are us.

Night of the Living Dead’s female lead, Barbara, played by the wonderful Judith O’Dea. The audience follows her on a horrifying journey that introduces us all to the first modern zombie (R.I.P. Bill Hinzman). We watch as she struggles and fights for her life till she finds a farmhouse down the road. I think our first clue that something may have snapped is when she finds the music box. Here Romero is giving us a little clue that Barbara might be starting to shut down, that she has been through too much in one day and her brain is trying to cope.

A few moments later, Ben arrives on the scene, and instantly takes charge. As Ben boards up the house, Barbara really starts to lose it and a quick slap sends her into catatonia. By the time she wakes up, the house has five more inhabitants and Barbara isn’t ready to deal with them either. She lets the bickering men make the decisions for the group. Barbara goes through most of that faithful night in a daze while others have to take care of her. Ben must stand up for her and protect her from not only the zombies outside the house, but their new antagonist, Mr. Cooper.

Unfortunately, it isn’t till the very end, when the struggle is most dire, that Barbara makes her way back to consciousness. Right in the thick of the most dangerous attack on the house, with zombies coming through the windows and the doors, Barbara snaps out of it and jumps into action to help Ben. In the worst turn of fate, this newly revitalized woman sees the reanimated corpse of her brother Johnny and lets him take her kicking and screaming along with him to the other side. And that is the end of Barbara’s troubled journey with the dead.

In the 1960s the Women’s Movement was a new thing. The idea of female equality was different. Most women still went through life preparing to be a wife and mother without other goals of their own. As Betty Friedan expressed in her pivotal 1963 book The Feminine Mystique, women’s lives had not been for themselves, but instead for the men around them. Barbara, intentionally or not, shows a lot of these traits. Her passivity through most of the film shows a strong reliance on the men in her life: first her brother and then Ben.

Back in 2013, I spoke to screenwriter John Russo about the character of Barbara and asked why she was not stronger. Russo said that he honestly wasn’t sure what the capabilities would be of the actress picked for the part, so he kept her role as simple as possible. At another event in 2013, I got to ask Romero the same question, and he admitted that the character of Barbara was very typical of the time, but he realized later that they should have done more. Both men talked about how one of the chief focuses Romero had making Night of the Living Dead 1990 was to right those wrongs with Barbara.

Interestingly enough, when I spoke to Judith O’Dea on the subject of Barbara, also in 2013, she came away with a very different interpretation of the character. She does not see Barbara as the usual “damsel in distress” from most horror films. Ms. O’Dea sees her character as someone who dealt with stress and trauma differently from those around her. That she needed time to internalize and digest the horrors she had seen. While this process may have taken longer for Barbara than for the other characters in the farmhouse, she stresses that this does not make her a weak person and that it was an understandable and even healthy way to see someone react to such extreme terror.

And what of the other women in the farmhouse:  Judy and Mrs. Cooper? Are they also stuck in a rut of not being their own women? Judy, played by Image Ten, the film’s production company’s secretary Judith Ridley, was a rather wishy-washy character who did not really want to deal with this new reality that they have found themselves in.

She was inactive until she disastrously jumps into action at the wrong moment and leads to the ultimate downfall of the group’s plan. Mrs. Helen Cooper, played by Marilyn Eastman, has no problem standing up to her husband. The audience feels for her and her trapped relationship. Is it her love for her daughter that seems to be keeping her in this marriage to the hot-headed Harry?

You can’t help but wonder if the couple would have gotten a divorce if they had survived that night. In the end, she resides to feeling helpless and, like Barbara, waits until the very end to try to take an active role in the group’s survival. In the saddest irony, it is her own daughter, Karen, that is her demise.

A decade later, Romero brings us back with the ground-breaking Dawn of the Dead. By now the threat has spread. We watch as Fran, Stephen, Peter and Roger escape Philly and run till they come across a new-fangled, indoor mall near Pittsburgh. Once they get inside and it seems obvious that the men are ready to set up camp, Fran (portrayed by Gaylen Ross) starts to make herself heard. She is to be treated as an equal and will be taught the skills needed to be able to defend herself. Aside from wanting to learn how to shoot a rifle, Fran is the only one of the group that realizes the need for a backup helicopter pilot in case something happens to Stephen.

She has no desire to become “den mother” to the men in the group and makes it clear very early on. Fran is a strong and independent woman of the 70s, no bones about it. There is one small monkey wrench that may make things more complicated. Fran is also pregnant. While she doesn’t want this fact to change the group dynamic, it is inevitable. She must remain at the base camp while the men deal with the second threat on the mall, the bikers that bring their perfect world crashing down around them. In the end, she did learn the survival skills necessary to make it to the end triumphantly with Peter as they fly off into the sunset.

By the time Dawn of the Dead hit theaters in 1978, America has seen the rise of the woman. Equality had become a war cry as more women joined the workforce and proved they were more than their husband and children’s keepers and the world was changing. We see that in the makeup of the opening scenes of the film that take place inside the WGON television studio. There are several women on staff and they are doing more than just getting people coffee. Christine Forrest Romero (George Romero’s then wife) is shown in the control room playing the Assistant Technical Director and Fran herself is one of the producers of the programming. The women in this station, like women all over the country, are equal members of the crew.

Gaylen Ross also has gone on record as stating that she made sure that Fran was more than just a female character that would scream and run from danger. In that interview I did with Romero, he acknowledges that there was a conscious effort to show Fran as being stronger by showing her standing up for herself and wanting to learn how to fly the helicopter. We see that he has learned from the experience of Night and wanted more for his female characters going forward. You can also follow this progression through Season of the Witch and Martin to see how women have become more important to their own stories within Romero’s movies.

The last movie in the original trilogy is by far my favorite for its bleakness, its intense gore and its powerful female lead, Sarah, portrayed by the amazing Lori Cardille. Day of the Dead is the worst-case scenario of the future. The only thing left is the struggle between the scientists that are searching for the cure and the military men that are there to supposedly protect them.

Sarah, the last woman standing, has to be the strong mediator that protects her team’s ability to function and work with Rhodes and his band of machismo fueled soldiers that are at wit’s end. Sarah is just as tough as the men and is repeatedly made to prove herself in action while at the same time trying to maintain her femininity (and keeping her emotions and breakdowns private). She is a pillar of strength and in the end, becomes one of the few survivors.

By 1985 the glass ceiling was a very real thing in our day-to-day struggle. Women everywhere were trying to succeed, only to find obstacles as they reach higher. Lori Cardille was very aware of this while creating the character of Sarah, who was trapped in a world of men telling her “no”. I was also lucky enough to speak with her about Sarah in 2013. Cardille felt that Sarah’s strength was her ability to put up a defensive wall in order to survive, but it was when she could let those walls fall that she felt the character was at her strongest.

Romero told me that when he built into the screenplay for Day the fact that Sarah was in-between everyone and being manipulated, he didn’t intend for this to make her a weak character but to add to her strengths. Her ability to stay true to herself among all this violent chaos made her a well-rounded, real person, and a truly resilient character.

In the end, all three of these women are heroes in their own way and show an evolution over the decades of not only the female struggle against the zombie hordes but also the path women have traveled in American history. This is just a sub-plot amongst the extremely rich world that Romero created with Night, Dawn and Day and yet another reason to love these films.